During a recent Attack Simulation against a high-profile client, Beyond Binary faced off against Symantec Email Security.cloud (formerly MessageLabs) whilst conducting a variety of phishing campaigns. This was not the first time we had come up against cloud-based email security services, however our usual approaches to bypassing them didn't yield any fruit. Symantec was doing a relatively good job of stopping our phishes from making it to the end-user. As a result, we had to put some time into coming up with a way of getting around the filter.

This short article contains detail on how the MessageLabs filtering was bypassed. We hope you find it useful.

First of all, Payloads!

To simulate different attacks we wanted to utilise a number of different payloads, and the first one that was tried was a simple CSV file that contained a well-known DDE attack vector to gain code execution. The aim was to invoke a custom payload, bypassing application whitelisting, resulting in active sessions on the target. The method we decided to go with in this instance was the (ab)use of regsvr32, a method researched and documented by Casey Smith. The required Scriptlet definition was hosted on several redirector servers within our C2 infrastructure.

The DDE entry inside the CSV file looked like this:

Here we can see that regsvr32 is the application that is being invoked, and the parameters passed to the invocation include a reference to the Scriptlet that is hosted externally. Note that the scriptlet does not need to have the .sct file extension, and hence our payloads contained an extention that was a little more innocuous.

The first few emails that were sent out to the target didn't appear to land in any inboxes within the organisation, implying that MessageLabs was filtering it out. So what was it about our payload that was causing the emails to be caught?

The first step in uncovering the behaviour of MessageLabs was to set up a simple email without any attachments. This email contained a link to an external site controlled by Beyond Binary, and the aim was to determine if MessageLabs was validating links by navigating to them behind the scenes. The email was sent to an email address that didn't exist (to avoid users receiving useless emails), but MessageLabs still parsed the email. As expected, the link provided in the body of the email was validated and we were able to see the MessageLabs spider reach out to the web server and retrieve the content of the referenced URL. The email bounced, proving that the email was passed through to the client.

From here, the team took the step to re-add the attachment, but only include a link rather than the full DDE payload. The link was validated, and the email bounced again. We then found that adding the full DDE payload back into the attachment (with a URL that didn't contain a Scriptlet) yielded the same result. At this point we knew that URLs in attachments are followed, and that MessageLabs doesn't care about the DDE payload itself. On the surface, it looked like the body of the Scriptlet that was hosted on the external server is what caused the filter to kick in and block the email source. To summarise what we found:

Some other interesting behaviour was noted:

To help in understanding the set up, the following image shows a sample attack infrastructure configuration that can be used as part of an Attack Simulation engagement. Infrastructure does vary from client to client, however this overview shows an approach that can fit various scenarios. 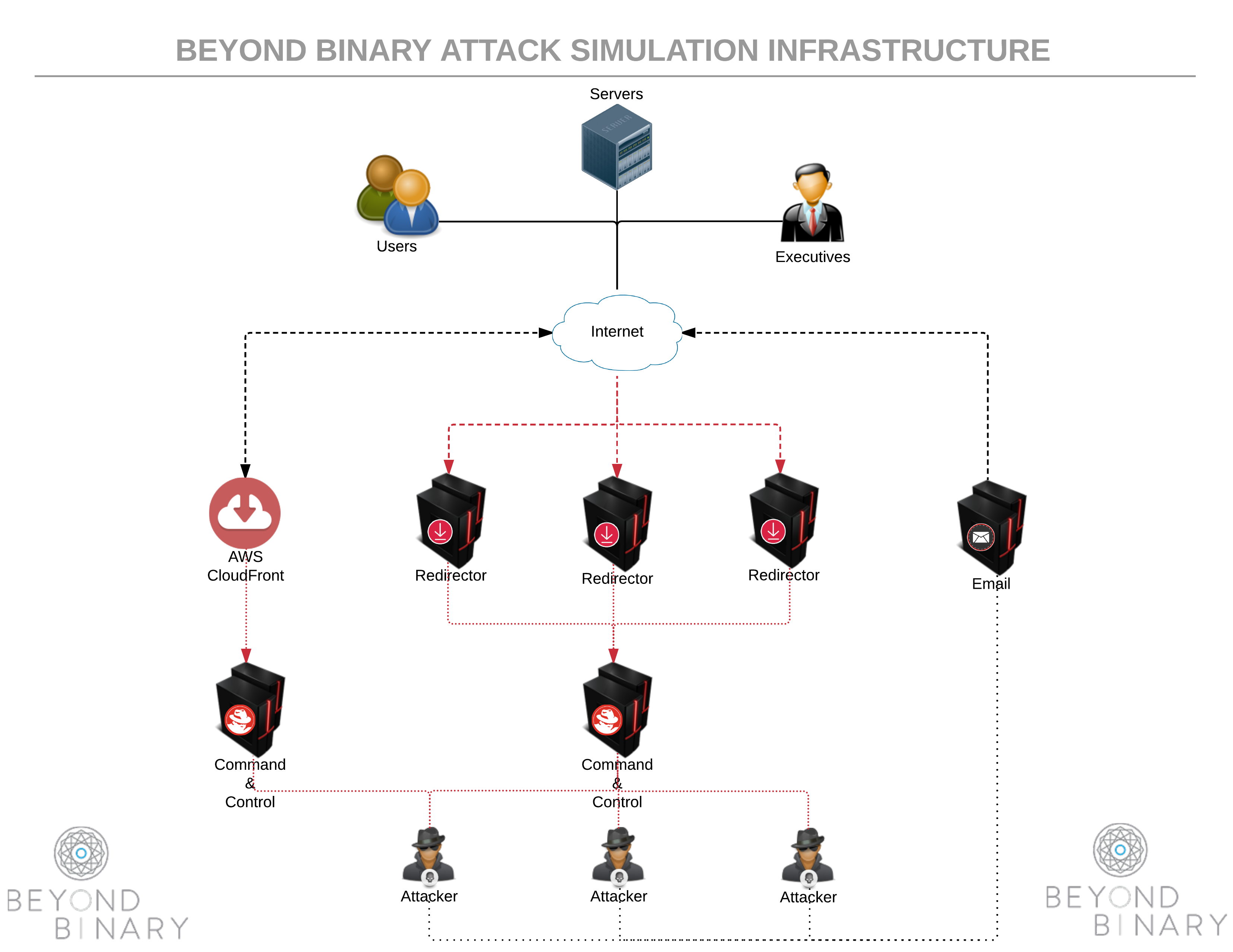 At Beyond Binary, we utilise Nginx to serve as a web front-end for redirectors and C2 infrastructure. This serves a number of purposes:

With Nginx already in place for the above reasons, it made sense to make use of it to help deal with the MessageLabs problem. Now that we understood what was going on with the filtering and URL validation mechanism, we were able to devise a fairly simple solution:

The following snippet of code is the relevant section of the Nginx configuration file that demonstrates how IP-based filtering can be used to redirect unwanted requests away from payloads that are intended for the client:

With this configuration in place, the following behaviour was observed during the rest of the phishing campaigns:

With a little bit of analysis, and simple use of well-known tools, it is trivial to bypass cloud-based email filtering mechanisms such as MessageLabs. In some ways, it's even helpful to have tools like MessageLabs in place as they can be used as an "email delivery oracle" that indicates whether or not emails are accepted.

This post was written by @AusJock. However, please direct any questions, queries, doubtful points or death threats to @TheColonial, he’ll be more than happy to accommodate.

Though it isn't widely known, support for Domain Fronting was added to Metasploit and Meterpreter by OJ Reeves in late 2017. Part of the reason that it's not common knowledge is the lack of documentation or discussion around how to use it. As a result, we decided to create this post so that users of Metasploit have a decent guide on how to configure and use Domain Fronting over HTTPS with a legitimate certificate.

During a recent Attack Simulation against a high-profile client, Beyond Binary faced off against Symantec Email Security.cloud (formerly MessageLabs) whilst conducting a variety of phishing campaigns. This was not the first time we had come up against cloud-based email security services, however our usual approaches to bypassing them didn't yield any fruit.

On March 1st 2015 Beyond Binary went public with an advisory that disclosed 0day flaws in Seagate Business Storage 2-Bay NAS devices. Days later, Seagate responded to the advisory through a number of channels:

Seagate is a well-known vendor of hardware solutions, with products available worldwide. Its line of NAS products targeted at businesses is called Business Storage 2-Bay NAS. These can be found inside home and business networks, and in many cases they are publicly exposed.

TeamCity is a multi-platform continuous integration and build server product created by JetBrains. It is used by many development organisations to automate the build and deployment of software solutions as part of the development process. TeamCity is a very popular product and hence the number of installations, both public and private, is quite high.